So now you have chosen both socket and chipset of your future motherboard. So what to do next?

Let’s check other important parameters of the motherboard, and I recommend starting with PCIe. What is PCIe? Oh, darling, that is one of the most important slots in PC! … After socket of CPU, of course, =)

So what is PCIe? Basically – a slot for a video card. But also much more!

PCIe (a.k.a. PCI-E) – an abbreviation for PCI Express – is an advanced slot of a motherboard that is intended for connection of high-performance devices such as:

It is a replacement for PCI/PCI-X slots that were used for older video cards, audio cards, modems and Ethernet network cards. Here is how it looks (and there is also PCI slot for comparison): 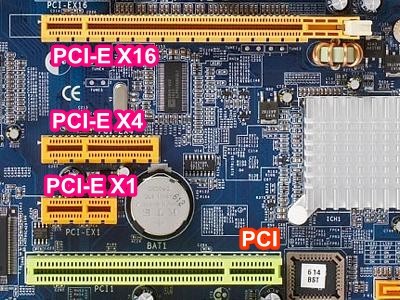 Oh, I know the question you have when looking at this picture…
“What do x16, x4, and x1 means? Why they have different sizes?”

And their multipliers mark a number of parallel lines that can transfer at the same time.

There is a good way to explain this system to anyone – here is a metaphor!

Imagine your desktop PC as a small store with 1-2 vendors.

The old PCI standard was like a deli: everyone was waiting in one line to be served, experiencing problems with the speed of service with the restriction represented by one vendor at the counter.

PCI-E is more like a hypermarket: each customer moves for products along their own individual line, and at the checkout, several cashiers immediately receive an order.

Obviously, the hypermarket wins several times in a regular store due to the fact that the store can not afford the bandwidth of more than one seller with one cashier.

That is very similar to dedicated data lanes for each expansion card or integrated components of the motherboard.

Returning to our metaphor: if we are talking about one seller in a store, then the x1 line will be this only seller serving one customer. The store with 4 cashiers has x4 lines. And so on, you can “calculate” the cashiers by the number of lines, multiplying by 2.

The different physical dimensions of the PCI-Express ports make it possible to clearly separate them by the number of simultaneous connections to the motherboard: the larger the port physically, the more maximum connections it can transfer to the card or vice versa. 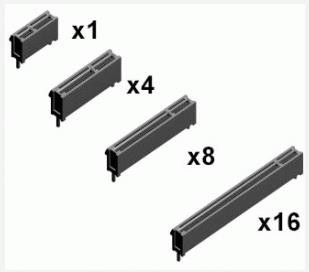 Here is the physical comparison of PCIe x1, x4, x8, and x16 lines.
x32 also theoretically exist, but just imagine THE SIZE of that thing alone!

These connections are also called lines. One line can be represented as a track consisting of two signal pairs: one for sending data and the other for receiving.

PCI-E has undergone many changes since its inception. Currently, new motherboards usually use version 3 of the standard, with the faster version 4 becoming more common, and version 5 is expected in 2019.

Different versions of the PCI-E standard allow you to use different speeds on each band:

But, generally speaking, the more lines there are on one PCI-E port, the faster data can flow between the peripheral and the rest of the computer.

But even the different versions use the same physical connections! How convenient, don’t you think?

As you already know, PCI-E x16 slots are used exclusively for video cards – these beasts require a lot of bandwidth!

PCI-E x1 slots are used for:

– because these devices can use maximum 1/8 of single PCI-E line transfer capability!

PCI-E x4/x8 lines are usually used for special SSDs with very high data transfer speed. But this SSDs cost thousands of dollars and made for Enterprise level, so they don’t interest us at all.

Something else VERY IMPORTANT to know about x1, x4, x8, and x16 lines!

Some manufacturers produce another type of PCIe slots.

Here is a wonderful example of that: 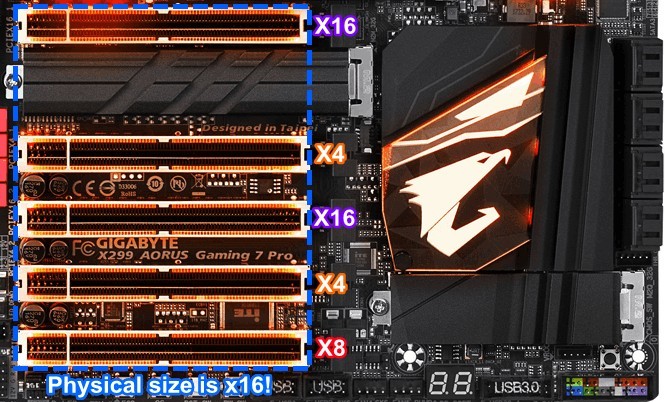 Just look at that! All the slots have the same physical size as PCI-E x16, but the amount of lines is different?!

“What the heck is going on?!! – the absolutely right question to ask!

I’m also not a fan of that thing – I prefer clear distinguish for types of slots with physical length, but it is a thing to be aware of.

How to know the exact amount and type of every PCIe slot on a motherboard?

It’s simple – you search for this motherboard online, go to the official site of the manufacturer (almost always first result).

After that click on “Specification” button and here you scroll down to see exact information about PCI-e slots:

So now you clearly know about all available PCI-E slots.

And you secured your possible future buy just with simple research!

Why do I focus so much on this?

Just because I know real accidents when a person bought computer components (not only motherboards) without looking at the specifications of product – and then he/she was disappointed or even mad!

Be smarter than that – use specifications and instructions, and you will be happy with your choices.

So what we are going to do next?

Now you know everything that you will need about the PCI Express.

Next step – learning about the RAM (Random Access Memory), types of RAM and slots for RAM.

But we will gonna do that later.

And that is all for now.  As you see, it’s not that complicated!

Just as always, I hope that this article helped you a lot, my wonderful reader.

If you don’t understand something in this article or something about chipsets in general, then use comments to ask a question.

I will answer any question with great pleasure and will be more than happy to help anyone.

And if you just enjoyed this article, you can leave your opinion in the comments too – every opinion of my readers is very important to me!

I wish you all the best and remember:

Computer technology is not rocket science!

Motherboard and RAM – What I need to know?

What is a motherboard? Explained for anyone!

What is a chipset of a motherboard? Which one to choose? Explained for anyone!